Sajan Prakash, a talented young swimmer who represents India, clocked his best time last month when he competed in the Singapore Swimming World Cup 2017. He came in fifth in the 200m Butterfly with a time of 1:54.49. He also broke a further 3 national records during the event in the 50m Freestyle (00:22.77), 50m Backstroke (00:26.25) and 100m Butterfly (1:54.49). When asked about his competitors, he replied, “I respect their commitment to the sport and they are my inspiration at this level of swimming. It was great swimming next to these legends. They motivate me to do many things for my country.” 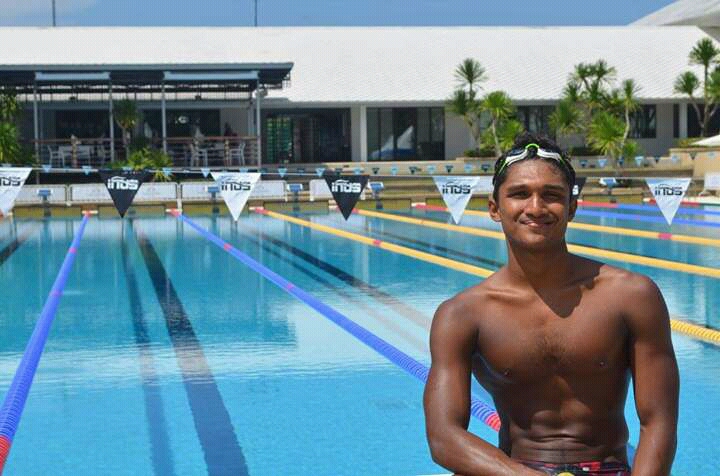 Cherantha de Silva, another impressive young swimmer, represents Sri Lanka and also holds a FINA sports scholarship to train at Thanyapura. He broke 3 separate national records at the recent 7th Singapore National Short Course Swimming Championship 2017 in the 100m Freestyle (00:49.29), 100m Butterfly (1:57.99) and 50 Butterfly (00:23.48).  He is recognised as the country’s top swimmer and hopes to be the first Sri Lankan ever to qualify for the 2020 Summer Olympics in Tokyo.

Sajan Prakash (23) is from Kerala, India. With the support of his mother, a professional athletics competitor, he tried out a few different sports before turning to swimming. After winning state and national competitions, he began training internationally and has broken a number of his country’s national records. He has been training at Thanyapura in the FINA programme since 2015 and sees the programme as vital for supporting swimmers in countries that lack Olympic-sized pools and suitable training centres. His ultimate goal is to be a swim coach and help raise swim standards back in India.

Cherantha de Silva (20) is from Columbo, Sri Lanka, and began his professional career aged 7. He has trained in Sri Lanka, the USA and now Thailand, and has previously taken wins at the South Asian Games (SAG). He was awarded a FINA scholarship to train in Thailand in 2015, which has been renewed again this year. He speaks of head coach Miguel Lopez fondly, “Miguel’s like a second father to us. He’s always there for us, for everything we need. It’s not just in the pool; anything about life, he’ll be there.”

Both young athletes train at Thanyapura Sports and Health Resort under the guidance of experienced head coach Miguel Lopez. Thanyapura has been a fully certified FINA training centre since 2015.